Theodore Roosevelt National Park is the only US national park named after a single person. It lies in the badlands of western North Dakota and is comprised of three geographically distinct units all of which are connected by the Little Missouri River. The North Unit is about 80 miles north of the South Unit, and the small Elkhorn Ranch Unit lies in between about 35 miles north of Medora. Roosevelt lived at the Elkhorn Ranch between 1884 and 1888. There are only a few foundation stones left at Elkhorn now and the ranch, while scenic, has little to photograph. The North ans South Unit badlands are not as stark as those in Badlands National Park and pale in comparison to those east of Capitol Reef. Both units make up for it with the diversity of wildlife present. Elk, Buffalo, and Pronghorn are common throughout the park and Big Horn Sheep are occasionally seen.

Below are the official North and South Units maps as jpegs and in four geocoded formats: GeoPDF, GeoTiff, KMZ file, and Oruxmaps. 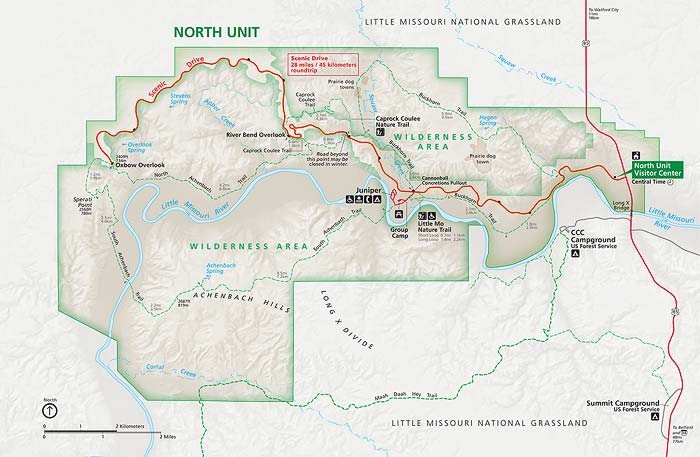 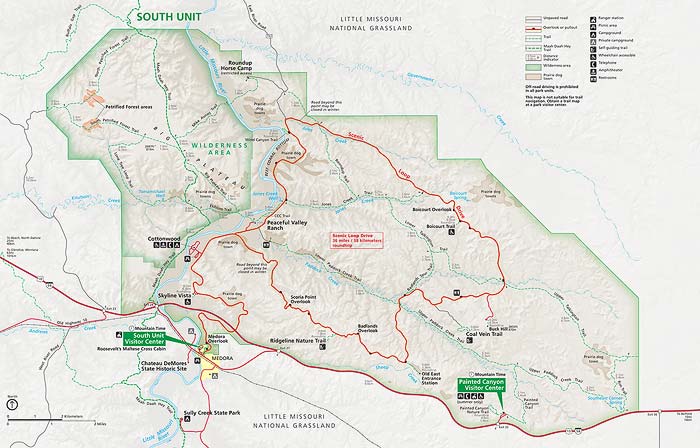 Theodore Roosevelt National Park is open every day of the year. Early to mid October the cottonwoods along the Little Missouri River change color making this a great time to visit. Visitation is highest in July and August. By October visitation is down by 65%. The South Unit is more popular than the North Unit and gets 75% of the parks visitors .The National Park Service maintains visitor statistics for Theodore Roosevelt National Park.

Theodore Roosevelt National Park climate is that of a a typical high desert in the northern part of the US. Winters are very cold with lows around 10°F and highs around 25°F and understandably there is little visitation. Winter is also the cloudiest part of the year with cloudy or mostly cloudy days 60% of the time. Despite the clouds winters are relatively dry with monthly snowfall normally between one and two inches. Spring is milder with overnight lows in May around 45°F and highs around 66°F. Cloud cover is similar to winter. Snow in April is not uncommon. Summers are warm with highs in the high 70s to low 80s and lows in the low to mid 50s. Summer brings clear to partly cloudy skies 75% of the time. September and October bring cool weather with clear or partly cloudy days about 55% of the time. Historical temperature, cloud cover, and rainfall data for the town of Medora, North Dakota(the gateway to the South Unit) can be found on weatherspark.com.

There are many trails of all levels of difficulty throughout both the North and South Unit. The National Park Service publishes an excellent hiking guide to help with trail selection and I have shown many of the trails on the map below. A few of the trails require crossing the Little Missouri River which is normally about knee deep but can be much deeper. If the river is more than knee deep use extreme caution when crossing. I suggest you only cross in a group when this is the case. The Washington Trail Association has many good tips for crossing streams. These include:

And here's one they seem to have missed - wider sections of the stream are often shallower and the current less strong.

To view the map in Google Maps please click anywhere on the map above.

In addition to a Google Map of Theodore Roosevelt National Park I have also added a Caltopo Map that can be accessed by clicking on the next icon.

Caltopo maps have several advantages over Google maps and a few disadvantages. For most purposes Google Maps are more than adequate, but if you plan to do off-trail hiking Caltopo maps are preferable.